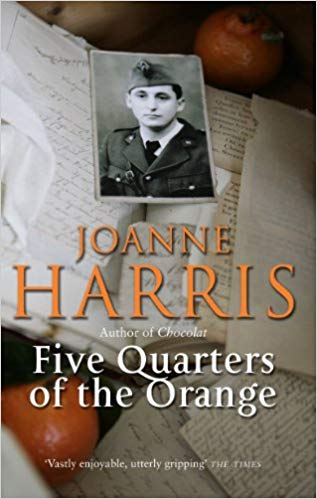 Beyond the main street of Les Laveuses runs the Loire, smooth and brown as a sunning snake – but hiding a deadly undertow beneath its moving surface. This is where Framboise, a secretive widow named after a raspberry liqueur, plies her culinary trade at the creperie – and lets memory play strange games. Into this world comes the threat of revelation as Framboise’s nephew – a profiteering Parisian – attempts to exploit the growing success of the country recipes she has inherited from her mother, a woman remembered with contempt by the villagers of Les Laveuses. As the spilt blood of a tragic wartime childhood flows again, exposure beckons for Framboise, the widow with an invented past. Joanne Harris has looked behind the drawn shutters of occupied France to illuminate the pain, delight and loss of a life changed for ever by the uncertainties and betrayals of war.

I have read several books by Joanne Harris but somehow I missed Five Quarters of the Orange. Set in wartime France and in the 1990s in the small village of Les Laveuses it tells the story of Framboise Dartigen who has returned to her childhood home, unrecognised, as a 65-year-old widow with a new name. In the first person, Framboise describes the farm as it was when she lived there with widowed mother, Mirabelle, and her elder brother and sister, Cassis and Reine-Claude. Young ‘Boise was not a likeable child. There was animosity between her and her mother because they were too alike but Framboise yearned to return and take up the role of excellent cook using her mother’s album of recipes and farm husbandry.

As the book begins to reveal a horrifying wartime event involving the family, we read extracts from the album where among the recipes Mirabelle has written personal journal comments.  This hard woman gave little affectionate to her children but provided them with delicious meals which are described in sumptuous detail. Only the smell of oranges is an anathema to Mirabelle since it is a sign of approaching migraines.

Avoiding their mother, the children live wild in the countryside, striking up a friendship with German soldier, Thomas Leibniz.  Framboise, the youngest, is the most cunning but she is also an innocent.  The children’s amoral actions lead them into a dangerous situation and Mirabelle is too involved in her own misery and bitterness to notice until it is too late.

In the 1990s Framboise seems in control of her life, running a very successful creperie with a regular clientele, but the past threatens her contentment and only old friend Paul can help her.

Joanne Harris writes rich, succulent prose, littered with food similes and names you can taste, which accentuate the contrast between the delights of life and the horrors which wartime brought to the French countryside.

Five Quarters of the Orange on Amazon UK