Alice Teale walked out of school at the end of a bright spring day.

She’s not been seen since.

Alice was popular and well-liked, and her boyfriend, friends and family are desperate to find her.

But soon it’s clear that everyone in her life has something to hide.

Then the police receive a disturbing package.

Who could have sent them? And what have they done with Alice?

DC Beth Winter & DS Lucas Black have a case to solve. They have only just met in a bleak Northumbrian town and they are trying to establish a working relationship, or at least Beth is. The disappearance of a bright, popular 17-year-old doesn’t seem to be causing much concern amongst the other police officers. They think she has run away but Beth and DS Black believe she is either dead or in serious trouble. When pages from her secret journal start being delivered, they learn more but are they being led along the wrong path?

I very much enjoyed reading how Beth dealt with her unfriendly boss and how she gradually began to understand him. They both live alone but are from different generations and backgrounds. What they have in common is the desire to find Alice and solve the case. There are several suspects and an interesting setting in the small town surrounding a large comprehensive school. The concerns of the teenagers and the more selfish approach of some of the adults is typical of any town in Britain. The geography and location of their investigations are clearly described which is necessary for the plot and the events thrilling and unexpected. I shall certainly be looking out for other novels by this author. 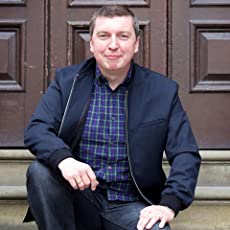 Howard Linskey is a best-selling author of crime and historical fiction published in seven countries. His debut novel ‘The Drop’ was voted one of the Top Five Thrillers of the Year by the Times newspaper and ‘The Damage’ was voted one of its top summer reads. His David Blake series was optioned for TV by Harry Potter producer, David Barron.

His historical novels are set in WW2. ‘Hunting the Hangman’ tells the story of the assassination of Nazi general and architect of the Holocaust, Reinhard Heydrich in Prague in 1942. ‘Ungentlemanly Warfare’ follows SOE agent Harry Walsh into occupied France.

Originally from the north east of England, Howard now lives in Herts with his wife Alison and daughter Erin.