Jayne Sinclair is back and this time she’s investigating her own family history.
For years, Jayne has avoided researching the past of her own family. There are just too many secrets she would prefer to stay hidden. Then she is forced to face up to the biggest secret of all; her father is still alive. Even worse, he is in prison for the cold-blooded killing of an old civil servant. A killing supposedly motivated by the betrayal and death of his mother decades before.

Was he guilty or innocent? And who betrayed his mother?

Jayne uses all her genealogical and police skills to investigate the world of the Special Operations Executive and of secrets hidden in the dark days of World War 2. A world that leads her into a battle with herself, her conscience and her own family.

This is not the first Jayne Sinclair Genealogical mystery but the first I have read. It appealed to me because the wartime drama dealt with the story of British agents undercover in France while the research made by Jayne in the present day showed that investigation can reveal dark family secrets. The plotting is excellent, and we learn a great deal about the possibilities of following leads, but I found both female characters rather lacking in substance. Monique Massat, Jane’s grandmother represents the heroines of the SOE and her sad story reflects the tragedy of war. This story could make an exciting on-screen drama and I shall be seeking out other volumes in this series.

The Sinclair Betrayal can be found on Amazon UK

Martin has spent most of his adult life writing in one form or another. As a University researcher in history, he wrote pages of notes on reams of obscure topics. As a social worker with Vietnamese refugees, he wrote memoranda. And, as the creative director of an advertising agency, he has written print and press ads, tv commercials, short films and innumerable backs of cornflake packets and hotel websites.

He has spent 25 years of his life working outside the North of England. In London, Hong Kong, Taipei, Singapore, Bangkok and Shanghai, winning awards from Cannes, One Show, D&AD, New York and London Festivals, and the United Nations.
When he’s not writing, he splits his time between the UK and Asia, taking pleasure in playing with his daughter, researching his family history, single-handedly solving the problem of the French wine lake and wishing he were George Clooney.

Transcription opens in 1981 when Juliet Armstrong is involved in an accident. As she lies on the ground, injured, her mind goes back to 1940 when she started work in the offices of MI5 and then to 1950 when she was a BBC schools programmes producer. A witty but unemotional protagonist she seems to be recounting events as they happened, but there are omissions, and can we really trust her testimony?

I loved this book, much preferring it to Life After Life. The story of how MI5 monitored Nazi sympathisers and the account of  the amoral social life of 1940 are fascinating. Juliet’s observations on a woman’s role, always making the tea but also sent out to risk her life on potentially dangerous missions without any training, reflect reality. At times, this novel made me laugh out loud, at others, it is tense and thrilling and always slightly puzzling. There are so many intriguing characters, from Peregrine Gibbons, so dapper but resisting her charms (Juliet’s naivety is believable) to Godfrey Talbot, the likeable double agent, via delightful Cyril, her hard-working companion in Dolphin Square and the tactless Daisy who is supposed to assist Juliet at the BBC.

As Juliet listens in to meetings between Godfrey and a group of fascist sympathisers her transcriptions are sketchy. Words are missing when the dog barks and we don’t have a complete picture of what is happening. This reflects Juliet’s story. She has the ability to lie easily, making her an effective spy and yet she cares deeply about the fate of a young maid who briefly helps her and who, like Juliet, is an orphan.

This is a deep novel with a light tone. It is interesting to read from the context of today’s politics and society. And if you are wondering, the flamingo on the cover is explained towards the end of the story. There has been criticism by some reviewers of the denouement in which we are told in a rapid summary how threads in the story linked and we learn more about Juliet’s motivation, but I am on the fence on this. It satisfied my queries but possibly could have been revealed more subtly. However, the texture and quality of the writing is so delightful I could happily read it all over again next week. 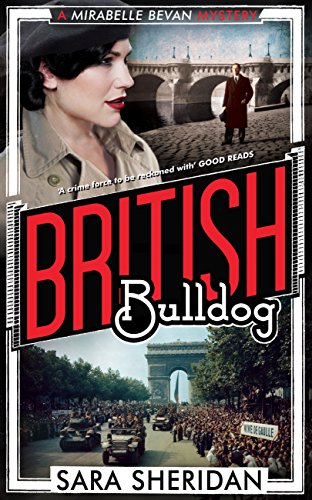 When Mirabelle receives a bequest from a lately deceased wartime acquaintance she is mystified – she hardly knew the man but it is not long before she realises that he certainly knew her. She is drawn back to re-examine her memories of WWII and is shocked to find that other people’s experiences do not chime with her own and more importantly, with what she knows of her erstwhile lover, Jack Duggan. Following the trail to the threads of what’s left of the resistance movement in Paris, Mirabelle is forced to face secrets she didn’t even know that she had.

This is the 4th Mirabelle Bevan mystery I have read after a gap of several years. From that standpoint it is clear to me that you can enjoy reading British Bulldog without any background knowledge. You will soon discover that Mirabelle is a brave and sometimes foolhardy heroine, determined to get to the truth in her investigations.

Leaving her friends and colleagues in Brighton, Mirabelle travels to Paris to look for Philip Caine, a British serviceman who disappeared in 1944. She is astonished to discover that Philip had worked alongside her deceased lover, Jack Duggan, and that Jack had lied to her about many aspects of his life. From the moment that she approaches one of Philip’s ex-contacts from the Resistance Mirabelle finds herself in danger, but she cannot resist following clues and instigating action. Just when Mirabelle is at her lowest, her close friend Superintendent Alan McGregor arrives in Paris, out of his depth, but prepared to risk everything to save her.

This fast-moving adventure is authentically described in its 1950s context and expresses the confusion and depression felt by many people post-war. Outdated views about the role of women have been challenged during wartime but domesticity is returning to those without Mirabelle’s bold courage. A great adventure which could so easily be transferred to the screen.

British Bulldog can be purchased at Amazon UK 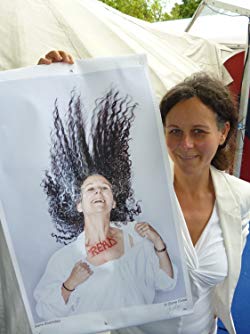 “History is a treasure chest which contains not only facts and figures, archive material and artefacts but stories. I love the stories.”

Sara Sheridan was born in Edinburgh and studied at Trinity College, Dublin. She works in a wide range of media and genres. Tipped in Company and GQ magazines, she has been nominated for a Young Achiever Award. She has also received a Scottish Library Award and was shortlisted for the Saltire Book Prize. She sits on the committee for the Society of Authors in Scotland (where she lives) and on the board of ’26’ the campaign for the importance of words. She’s taken part in 3 ’26 Treasures’ exhibitions at the V&A, London, The National Museum of Scotland and the Museum of Childhood in Bethnal Green. She occasionally blogs on the Guardian site about her writing life and puts her hand up to being a ‘twitter evangelist’. From time to time she appears on radio, most recently reporting for BBC Radio 4’s From Our Own Correspondent. Sara is a member of the Historical Writers Association and the Crime Writers Association. A self-confessed ‘word nerd’ her favourite book is ‘Water Music’ by TC Boyle.