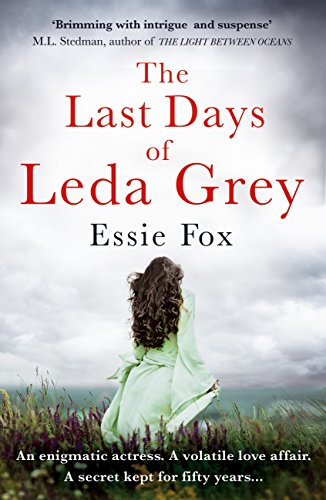 Here is a story of obsession and passion, set in the hot summer of 1976 but harking back to 1913 when a bright young starlet moved from on stage magic and photographic model to the exciting world of silent movies.  Brother and sister, Theo and Leda are struggling to run their father’s photographic studio after his sudden death when two exciting figures enter their life in the seaside town of “Brightland.”  Ivor Davies, a dashing actor, briefly becomes their lodger and then Charles Beauvois, a film director entrances them with promises they can’t resist.

But Leda Grey has been forgotten until young journalist, Ed Peters, enters Theo’s shop more than 60 years later.  Captivated by photographs of Leda and intrigued when Theo tells him that, “she hides herself away like a doomed princess in a fairy tale,” in a cliff top home with no electricity, he resolves to interview her and write her story.

At first this slow-moving tale failed to capture my interest but as Ed came under Leda’s spell, the atmospheric account of the sordid decay of the house and Leda’s haunting description of her time as muse and lover of Charles lead me to turn the pages rapidly to uncover the mystery of these tragic characters.

Readers of Essie’s earlier novels will recognise her rich, sensuous writing but this book has an added dimension in the psychology of Ed Peters and his struggles to resist a woman at the end of her life, who enters his fantasies and dreams.