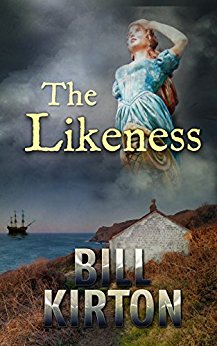 In this sequel to Bill Kirton’s “The Figurehead,” we meet wood carver, John Grant, once again, showing his strength and resolute character as he heads out of Aberdeen harbour with his fellow oarsmen in the Lifeboat.  Meanwhile, Helen Anderson, frequently in John’s thoughts, is trying to persuade her father to allow her active participation in his business.  Her parents know that she has grown close to John Grant, although he is not her social equal, but she does not follow the normal accepted behaviour of a young woman in 1841.  She is keen to travel on one of her father’s ships, on part of its journey to the colonies, to see how accommodation might be improved.

Imminent separation begins to drive John and Helen apart, as his new project to carve a figurehead for part of a ship on stage, brings him into frequent contact with an actress in the touring company.  The discovery of the original star of the play, dead behind the fishing sheds, has made him determined to solve the possible murder and there are several likely suspects.

The details of the shipping business and the life of a touring group of actors enrich this distinctive historical mystery and misunderstandings in the relationship between Helen and John are solved in an unusual manner, based on their love and respect for each other. A wonderful opportunity to discover the people and hardships of this thriving 19th century port.

The Likeness can be found on Amazon UK   and Amazon US

My review of The Figurehead.

Bill Kirton was a university lecturer in French before taking early retirement to become a full-time writer. He’s won two 2011 Forward National Literature Awards – ‘The Sparrow Conundrum’ was the overall winner of the Humor category and ‘The Darkness’ was runner up in the Mystery category. ‘The Sparrow Conundrum’ also won the Readers’ Choice Award for satire/humor on the Big Al’s Books and Pals website in 2012. His historical mystery, ‘The Figurehead’, was long-listed for the 2012 Rubery Book Awards.
He’s produced material in many different media. His radio plays have been broadcast on BBC Radio 3 and 4 and the Australian Broadcasting Corporation. His stage plays have been performed in Aberdeen, Edinburgh and the USA and he’s been the visiting artist to the Theatre Department of the University of Rhode Island on four separate occasions. There, he directed stage plays, gave classes on creative writing and theatre, performed in revues and translated three plays by Molière for public performance, one of which won a BCLA prize. Material from his Edinburgh Festival revues was broadcast on the BBC, ITV and French television.
He’s also been a TV presenter and a voice-over artist and his scripts for corporate and educational DVDs and videos have won awards in the UK and USA. He’s been a Royal Literary Fund Writing Fellow at the Robert Gordon University, Aberdeen, and the universities of Dundee and St Andrews.
Most of his novels are set in the north east of Scotland. ‘Material Evidence’, ‘Rough Justice’, the award-winning ‘The Darkness’, ‘Shadow Selves’ and ‘Unsafe Acts’ all feature DCI Jack Carston. ‘The Figurehead’ is a historical novel set in Aberdeen in 1840. The award-winning ‘The Sparrow Conundrum’, is a spoof spy/crime novel also set in Scotland. His comic fantasy novella, ‘Alternative Dimension’ satirises online role-playing games.
His short stories have appeared in the Crime Writers’ Association annual anthology in 1999, 2005 and 2006. IN 2010, one was also chosen for the ‘Best British Crime Stories, Vol. 7’ anthology edited by Maxim Jacubowski.

2 thoughts on “The Likeness by Bill Kirton #RBRT #BookReview #TuesdayBookBlog”