My heart is pounding with excitement at the chance to interview the irresistible Colt McCall from June Kearn’s book. 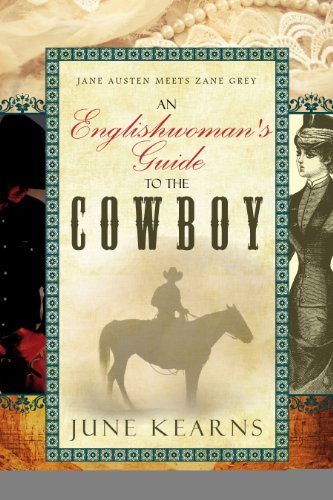 What were your first impressions of Miss Annie Haddon?

First off? As if a scruffy dog had suddenly appeared and attached itself to me. Yeah, someone’s stray, a pampered pet – one that wasn’t particularly biddable, either. For such a small fry though, she seemed to have a pretty big mouth. A talker, too – mite too fond of her own opinions to my mind, at the time. No idea what she’d landed herself into, either. Not … a … single, solitary clue.

Annie called you intimidating and you certainly don’t suffer fools readily.  Would your life be easier if you were more diplomatic?

Let’s face it, shall we? Annie was white, English, opinionated. Not a hope in hell of understanding someone like me. As for diplomacy! Well, the West belongs to the meat-eaters, always has, always will. The meek don’t inherit much west of Chicago. Anyway, a man needs to show he can defend himself. If people think he can’t, he’s in trouble.

You seem to have a very bad opinion of the English.  What have they ever done to you?

Ha, tried to wipe out all rotten traces of Indian for starters. At Mission School, I was taught by an Englishwoman. She thought I was barely house-trained and had the idea that a daily dose of British poets and Shakespeare was the best way to civilise little hell-raisers like me. Along with not letting me speak my mother’s language, of course – shaving my head and beating manners and the Bible into me.

Yeah, one thing I’ve learned about the English: You don’t tell them, they tell you.

You don’t seem to be a typical Texan and yet you seem to have some good friends.  What do these friends have in common?

I guess they’re all … outsiders? Yeah, every damn one, when I come to think about it. The displaced, the hunted, the ignored. Mostly fighters for their own rights, of course, their own land. For years, we’ve been killing off their food, stealing their hunting grounds, robbing them blind.

Are the divisions of the Civil War still causing problems in Texas?

Well, what do you think? Draw a line down the middle of any country – you’re asking for trouble. Somehow, it makes some folk feel more entitled to boss others around. Take Southerners, for example. Robert E. Lee still adorns many a parlour wall round here. Oh, yeah. Plenty haven’t been too keen on freeing their slaves, either.

You seem to find Miss Haddon just a little too talkative, but do you think she has changed her feelings about Texas since you first met her?

Well, I guess when we first met, Annie was just trying to make sense of everything – questions, questions, questions. Her main concern, first off – if you’d care to believe it – was about losing those bound copies of Dickens in her trunk! While I was just hell-bent on getting us as far away as possible from the Comanche.

Even from her first arrival though, she seemed to love the landscape. Nothing had prepared her, she once told me – for that vast open space, the wide, wide vista. Fluted rock on the horizon soaring to meet limitless blue sky. The throat-catching beauty, the loneliness.
You can’t just pass through this landscape, y’know. It reaches out and draws you in, every time.

And now? Guess Annie knows that she belongs here.

And have you changed your opinion of her?

Oh, yeah. My opinion probably started to shift when she teamed up with two outlaws, swallowed a quart and a half of whisky and started a bar-room brawl – after trying to stare down that Comanche brave, of course.

It was her first ever time away from the protection of her relatives. I’d expected fear, silence, trepidation. Instead, she showed intelligence and courage, plus a real delight at being able to truly be herself.

Thank you, Colt, it’s been a privilege to hear your view of Texas both from your own opinions and those of  “the Englishwoman.”

You can read my review of June Kearn’s book here