I have recently become a fan of the wonderful Miss Fisher mysteries on TV. Set in Melbourne during the 1920s, the programmes show beautiful architecture and clothes to die for. The plots are reminiscent of Miss Marple or Agatha Raisin so I decided it was time to read one of the many books about this incredible heroine.

Looking for a story I had not seen on television I chose Book 9, Raisins and Almonds. 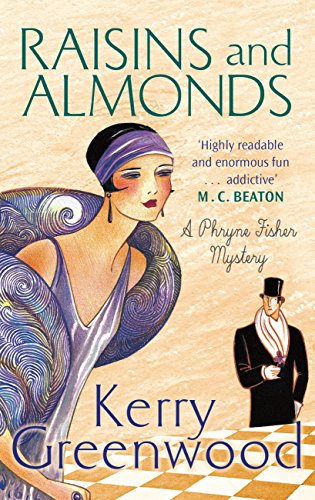 Phryne Fisher is a wealthy single woman with a busy household including two adopted daughters, Ebony the cat, Molly the puppy and her staff. Elegantly dressed, at all times, Miss Fisher is a passionate, pleasure loving woman who strives for justice, using her intellect to solve crimes which defeat the police force. She takes in waifs and strays because she remembers poverty in her childhood and her wealth has not made her proud or snobbish.

This mystery centres on the busy Eastern Market, where the victim has been murdered with strychnine, in a book shop belonging to Miss Lee. Detective Inspector Jack Robinson, a less attractive character than he appears in the TV series, immediately arrests Miss Lee as the chief suspect, but Phryne’s help is enlisted by Miss Lee’s Jewish landlord, Mr Abrahams, to find the real culprit. Embarking on an intimate love affair with Mr Abraham’s beautiful young son, Miss Fisher also explores the Jewish community and the dabbling in alchemy by those studying the Kabbalah.

Aided by her reliable assistant, Dot, and handy Jacks of all trades, Bert and Cec, while being consulted unofficially by Inspector Robinson, Phryne makes progress but brings herself and those she loves into danger. The author has thoroughly researched ancient Jewish beliefs as well as the problems of living in an anti-Semitic society.

The author has a witty turn of phrase and has created delightful characters. This mystery is an easy read, with an imaginative plot and a novel setting.

Raisins and Almonds is available at Amazon UK

Kerry Greenwood was born in the Melbourne suburb of Footscray and after wandering far and wide, she returned to live there. She has a degree in English and Law from Melbourne University and was admitted to the legal profession on the 1st April 1982, a day which she finds both soothing and significant.

Kerry has written twenty novels, a number of plays, including The Troubadours with Stephen D’Arcy, is an award-winning children’s writer and has edited and contributed to several anthologies. In 1996 she published a book of essays on female murderers called Things She Loves: Why women Kill.

The Phryne Fisher series (pronounced Fry-knee, to rhyme with briny) began in 1989 with Cocaine Blues which was a great success. Kerry has written thirteen books in this series with no sign yet of Miss Fisher hanging up her pearl-handled pistol. Kerry says that as long as people want to read them, she can keep writing them.

Kerry Greenwood has worked as a folk singer, factory hand, director, producer, translator, costume-maker, cook and is currently a solicitor. When she is not writing, she works as a locum solicitor for the Victorian Legal Aid. She is also the unpaid curator of seven thousand books, three cats (Attila, Belladonna and Ashe) and a computer called Apple (which squeaks). She embroiders very well but cannot knit. She has flown planes and leapt out of them (with a parachute) in an attempt to cure her fear of heights (she is now terrified of jumping out of planes but can climb ladders without fear). She can detect second-hand bookshops from blocks away and is often found within them.

For fun Kerry reads science fiction/fantasy and detective stories. She is not married, has no children and lives with a registered wizard. When she is not doing any of the above she stares blankly out of the window.