Down and Out in Kathmandu is the first adventure of Zelda Richardson.  I came to it having already met the determined Zelda on her second adventure in The Lover’s Portrait.  In this earlier story, Zelda has just left her secure IT job in Seattle to volunteer as an English teacher near Kathmandu for 3 months.  Nepal proves to be a culture shock and the work a hard task for a young woman with no teaching experience or training.  She must live with a Nepali family who live a more western life than she had expected and yet she has to adapt to a very different diet including freshly slaughtered goat.

But first Zelda encounters Ian, an Australian backpacker who has taken a break in his teaching career to find pleasure and marijuana in Kathmandu.  They spend time together exploring the city, but part when Zelda commences her volunteer work.  With his dreadlocks and casual attitude, Ian seems less appealing than Zelda, but gradually I warmed to him.

The third character in the novel was a surprise.  Tommy is an unpleasant wastrel, bumming around in Thailand but wishing to return to Toronto as a successful man.  He decides to make his fortune by double-crossing the Greek, a gangster for whom he smuggles jewels.  He is doomed to fail but what can this have to do with Ian and Zelda?

The three threads are drawn together towards the end of the story after we follow Zelda’s failure as a teacher and her anger at the way the Rana family try to use her to further their ambitions for their children.  Jennifer Alderson’s knowledge of Kathmandu bring the poverty, dirt, danger and beauty to life and add credibility to the dramatic later chapters.  It is events in the city which most caught my imagination but Zelda’s experiences based on Jennifer’s life are very interesting.  I would like to have read more about her experiences but this would have weakened the structure of the dramatic events. 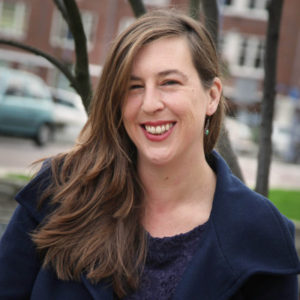 Jennifer S. Alderson worked as a journalist and website developer in Seattle, Washington before trading her financial security for a backpack. After travelling extensively around Asia and Central America, she moved to Darwin, Australia, before finally settling in the Netherlands. Home is now Amsterdam, where she lives with her Dutch husband and young son.

Jennifer’s travels and experiences colour and inform her internationally-oriented fiction.

Her first novel, Down and Out in Kathmandu: A Backpacker Mystery, is a travel fiction adventure through Nepal and Thailand.

The Lover’s Portrait: An Art Mystery, her second book, is a suspenseful ‘whodunit?’ which transports readers to wartime and present day Amsterdam.

Both are part of an on-going stand-alone series following the adventures of traveller and culture lover, Zelda Richardson. The third installment, another art-related travel thriller (working title: Smuggler’s Deceit) will be released in the Autumn 2017.

Her travelogue, Notes of a Naive Traveler: Nepal and Thailand, is now available as paperback and eBook. It is a must-read for those interested in learning more about, or wishing to travel to Nepal and Thailand.

8 thoughts on “Down and Out in Kathmandu: A Backpacker Mystery by Jennifer S Alderson #TuesdayBookBlog”