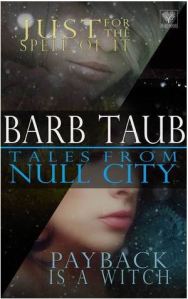 This book contains two stories; the first and longest is Payback is a Witch.

I would not usually pick up a fantasy book as my first choice, but I have found that those written for YA are by far the best. Fantasy requires an inventive mind, creative ideas and preferably, a sense of humour. Luckily Barb Taub has all three, in spades.

As far as I am concerned, you are on to a winner if you live with an enormous Norwegian Forest cat, called Bygul, especially if she is also a goddess who can vanish. But the real heroine of this story is Claire Danielsen, a young witch struggling to continue the work her mother and grandmother did before her. Living alone in the woods she channels the power given to her by her goddess in order to fight evil. Six years earlier she had trained as a Warden to protect the innocents against those who plan to destroy Null City, alongside Peter Oshiro, whom she had loved and walked away from, but now he is back in her life.

Claire’s character is particularly well developed. We feel her confusion, her determination and her pain. She tries to shield Peter from harm and to maintain her lonely independence as the increasing danger of Barghests, the Black Hounds, and the unsolved mystery of her mother’s death cause her to banish both him and her goddess, Bygul.

Barb shows the reader how Claire becomes aware of the threat around her very effectively using these words, “The blackboard-scratching itch in her brain had intensified until it now felt like claws slashing inside her head.”

This is a great read for excitement, tension, romance and a twist in the tail.
The second story, Just for the Spell of it, is a shorter and lighter tale with less feeling of impending doom although there are parallels with the first story. Once again there is a female heroine with special powers with an attractive male sidekick. Eirie Danu is a radio DJ with a popular bubbly personality; Liam, her fellow Warden, is a serious, unemotional young man in person, but he is also a zany prankster who rings up her radio show with daft messages.

Eirie and Liam are given the task of finding a missing Argentinian soccer player and a baby who is apparently Eirie’s sister. We discover that Eirie was the daughter of the Queen of the Fae from a land of eternal youth but Eirie had abdicated as heir when she thought her mother had died several years ago.

We accompany Eirie and Liam through frightening adventure and a roller-coaster relationship as she reveals to him that she is more than just a fun loving girl and they both make decisions about commitment.

These two refreshingly different tales are well worth investigating and I will certainly be seeking out the earlier books to learn more about Null City.

4 thoughts on “Tales from Null City by Barb Taub”